A Reflection on Genuflection

These people are going to think I’m a total idiot. Bunch of Ph.D.s in this room, bunch of Harvard and MIT alumni, shit… What am I doing here? Shit, the game is up. The game is up, but what can I do? I could hide in the toilet, and stand on the seat until it all blows over and they cancel the event and everyone gets drunk and forgets there ever was a show called Burq Off!, Then they could all go back to eating their samosas and mimosas and leave me to be. Why don’t they all just leave me to…

Now the Japanese dude with the ponytail is introducing me, saying something about social reform and performing, didn’t I write that bio? He gives a small nod, and people start clapping, and I walk onto the stage. I’m floating, I can’t see, but then I lock onto someone, these eyes that are brown or blue or purple, for all I know and can remember… I sink. I smile. I arrive.

“The first thing I ever wanted to be was an….” and so the journey begins, with me in it, on it, leading it. Something else takes over, and I ride with it. They are laughing at me, I am performing for them, catching the beats, flowing like a well composed tune, but one that is being composed as I speak. I sit down, twirl my fingers, and I’m my grandmother, deceased for three years. I get up as my mother, flowing like the light that she now is since she passed ten years ago. And I turn around as Abbu, my father, still alive and breathing although alone and a nomad – can’t settle enough to find ways to make himself smile. 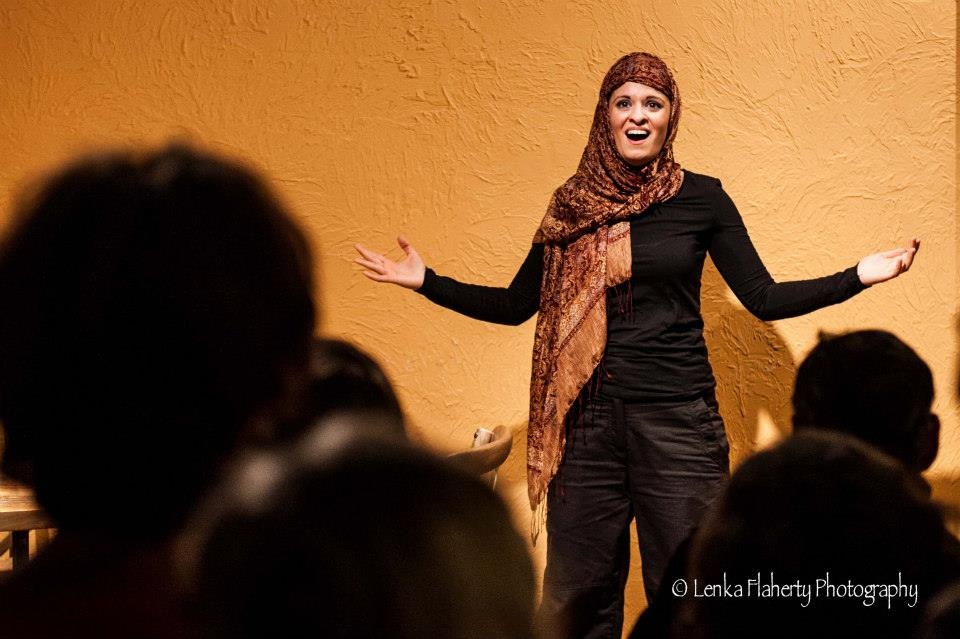 But I’m speaking like him, and an audience of one hundred are laughing, amused at the spectacle of Abby, my imitation, my love for the man that made me so weak, so insecure that I can’t look in the mirror with love, but only doubt. So strong, so confident that I parade about in front of these hundred with just a single scarf to protect me.

“This woman…” he says, “This woman is a manifestation of fifteen years of my work. Through play, she has entered your hearts, but make no mistake, she is deadly serious.”

Now the man is moving, he has tears in his eyes, and he is bending, he is kneeling in front of me, in front of these hundred that sit there, watching.

“In honor of this woman’s courage, and for her spiritual passion, and talent, and for her heart for change, I bow to her and her work.” He kisses my hand, tears are welling in his eyes, and they stream down my cheeks, and he is gone. 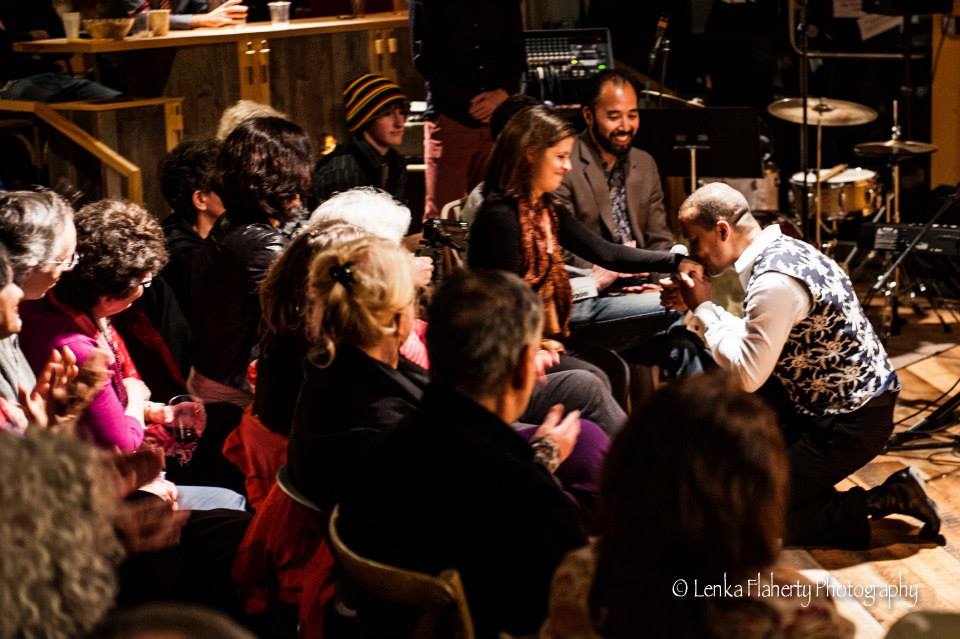 Genuflection: an act of bending the knee or touching it to the ground in reverence or worship.

So foreign to me, this act. Another bending their knee in front of me, giving me such reverence that I could be free from self-doubt and impediment. Could I take the same act, and bend to you? In reverence of the human spirit, and for all you do, I bow to you, and bend my head, in servitude for what we do.

2 Responses to A Reflection on Genuflection